You poor neglected blog.  It’s just been too nice outside, and there’s been too much fun stuff going on to tend to you.  But I have some floral gifts for you today, in the form of poppies.  Yes, poppies!

Larry and I inspect the poppies – they are about 5′ tall!  Photo by Brandon Adamek

I started these Hungarian Blue “bread seed” poppies from seed on March 20th of this year, a Seedsavers purchase. I love buying stuff from Seedsavers because I really believe in their mission, which is all about saving and sharing heirloom seeds to preserve genetic diversity.  In fact, they maintain thousands of varieties of different plant types – from amaranth to watermelon – in one of the largest seed banks of its kind in North America. They also store varieties in back-up locations at the USDA Seed Bank in Fort Collins, CO and at Svalbard Global Seed Vault in Norway, which houses the most diverse collection of food crop seeds anywhere on Earth.  Seeds are tucked away safely into the permafrost in the mountains of Svalbard, just in case we lose our crops due to some type of catastrophic event. 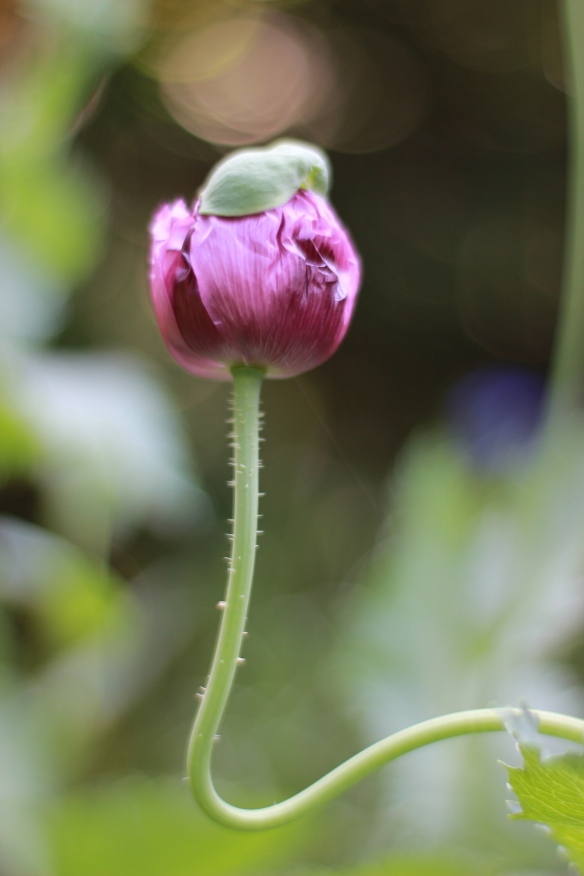 Back to my poppies.  These are Papaver somniferum ‘Hungarian Blue’ – a rare heirloom variety whose blue purple petals quickly emerge, crinkled and shiny.  This is the variety whose seeds are most often used to grace the tops of bread loaves and bagels.  Mmm.

The flowers don’t last long, but luckily the petals fall away to reveal a milky green blue seedpod, which will be full of edible poppy seeds when they dry out.  I’d like to save some for replanting, use some for baking onto the tops of bread or muffins, and use some seedpods in arrangements for Thanksgiving.