In today’s class we talked about garlands, which were popularized during the Greek and Roman Periods.   “Garland:  a wreath or festoon of flowers, leaves, or other material, worn for ornament as an honor or hung on something as a decoration.”  Personally, I like the idea of festooning long garlands all around the house and wearing a head garland at the same time.  In ancient Greece, head garlands (also called chaplets) were made of predominately foliage, and were awarded to honor athletes and heroes as symbols of allegiance and dedication.

Apollo crowned with a laurel wreath / photo courtesy of http://www.theoi.com

During the Roman period, garlands and wreaths were heavy and elaborate with fragrant and colorful blooms.  An abundance of lavish flowers was seen as a sign of opulence and wealth.  According to our teacher Jane Godshalk, there’s a story of one rich Roman Emperor who had a dinner party with a fragrant surprise: ceiling panels full of roses and other flowers. The idea was to let the canvases fall deliciously over the heads of his guests.  But it didn’t go like that –  a few of his guests were in fact smothered by his fabulous flowers.

There are a few ways of going about making a garland, and though we weren’t able to cover actually doing them all in this class, we were given a quick demo on how to make a wire garland, using pre-soaked Oasis blocks wrapped in plastic wrap and enclosed in chicken wire.  You just stick the materials into that, careful of the dripping.  A rope or twine based garland seems easy enough – just wire bundles of flowers/foliage around a stretch of rope or twine, making a loop with the twine on either end to hang it easily.  Work from one end to the middle, and then the other end to the middle. These are good for wrapping around pillars or poles, hanging swags on a table, or framing a window or door.

small garland of purple limonium, seeded eucalyptus, and bupleurum made by Jenny in class

And then there’s the table garland – essentially a wreath formed out of Oasis that you poke your plant materials into. Start with a basing of greens – in this case we used Ruscus, Myrtle, Galax and Seeded Eucalyptus.  Place them inside and out of the ring at varying angles.

Then add your main flowers – in this case spray roses and carnations.  Group them evenly throughout.  I used the seeded Eucalyptus as a filler flower really, but Limonium or I hate to say it Gypsophila also work well as a filler.  All of these items except the carnations (these were left over from another class) will dry pretty well and therefore this table garland borders on everlasting.

All of these garlands are quite labor intensive and therefore should be done the day before an event.  That goes for head garlands too. In fact, I had just enough time in class to squeeze out a quickie for my niece June.

Niece June modeling the head garland I made

This was super fun to make and not too hard at all.  I measured out a piece of honeysuckle wire (just a wire with a brown wrapping, also comes in green,) making one end into a loop.  Then I made small bunches of daisy mums, Bupleurum, and Gypsophila or Baby’s Breath in my hand, which I then wired onto the main wire using bind wire.  Many mini bundles later the garland was filled, and I added some white ribbon on. 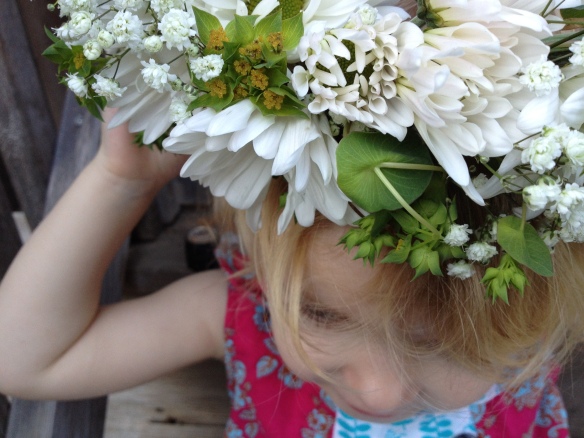 Head garland of Bupleurum, daisy mums and gypsophila on June

I really, really liked making the head garland.  I love the idea of wearable flowers – this might be a niche for me.  And when you put them on you feel like a total princess! (Or Greek goddess!)

Despite it's small size, I couldn't resist putting on the garland myself. photo courtesy of Juliet